USA gold-winning soccer player Megan Rapinoe got naked for ESPN The Magazine's Body Issue. She shows off her impressive toned body. Rapinoe is the first openly LGBT athlete to appear nude in the ESPN Body Issue. Check out Rapinoe in thongs in the Sports Illustrated Swimsuit Issue.
Megan Rapinoe is an out lesbian. She has not concealed her sexuality but rather just did not come out publicly. Rapione, naked in ESPN The Body Issue, spoke to Out Magazine about coming out:


"To be honest I've been thinking about it for a while, trying to find a time that works, now leading up to the Olympics, people want to get personal stories. Our team in general is in a position where people look up to us and kids look up to us. I embrace that and I think I have a huge LGBT following. I think it's pretty cool, the opportunity that I have, especially in sports. There's really not that many out athletes. It's important to be out and to live my life that way."

Posted by Jockstrap at 10:15 PM No comments:

2014 bronze medal winning US Olympic bobsledder Aja Evans gets naked in ESPN the Magazine's Body Issue. Sexy Lolo Jones get the attention, but Aja Evans is a medal-winning hottie.

The sexy 2014 Sochi bobsleigh bronze medalist, who is the brakeman for cutie Jamie Greubel, has a very strong body. On ESPN.com, hottie Aja Evans says:


"People always compliment me on my legs. Sometimes it's creepy, other times it's cool. Those football players all think they have this amazing idea that we'll have the most phenomenal kids ever. And that's the worst pickup line ever."

Posted by Jockstrap at 12:32 PM No comments:

Canadian Hayley Wickenheiser might be the best women's hockey player ever, but American Hilary Knight is arguably its sexiest. Hockey fans - and all other red-blooded men and women who like that sort of thing - get to see Hilary Knight nude in the 2014 ESPN the Magazine's Body Issue.

Check out another naked hottie with tattoos: Kaillie Humphries - Gold Medal Bobsleigh
Tattooed hottie Hilary Knight has the Latin phrase "dum vigilo curo" tattooed on her side. Knight says it from her family's coach of arms and means “While I watch, I care.” Knight told the Badger Insider Magazine that she has three tattoos in total. I'd sure like to see more of Hilary's tattoos.

Sexy Hilary Knight is definitely not just a pretty face. As the ESPN the Magazine's Body Issue shows the U.S. Olympic silver medalist in 2014 has an awesome nude body. In all seriousness, Hilary Knight is also an amazing hockey player.
Some of Hilary Knight's top accomplishments include:

Posted by Jockstrap at 8:01 PM No comments:

There is nothing Amy Purdy can't do. The sexy brunette won a bronze medal in snowboarding at the 2014 Paralympics in Sochi, Russia. Then the hot Amy Purdy made the finals of Dancing With The Stars with Derek Hough. The Paralympics hottie finished second to ice dancing hottie Meryl Davis.

See sexy Meryl Davis in a bikini
Sexy Amy Purdy has also appeared on the Amazing Race. She is also an actress/personality and was in What's Buggin Seth and the TED video Living Beyond Limits. Amy Purdy is also to be The Price is Right.

Posted by Jockstrap at 8:54 AM No comments:


Surfing hottie Coco Ho is nude in the 2014 edition of ESPN The Magazine's The Body Issue. The beauty from Honolulu, Hawaii has been voted a top three fan favorite in a Surfer magazine poll. It is not only her good looks that get Coco Ho noticed and win her a place in surfing fans' hearts.
A sexy surfer, Coco Ho has won more than 25 surfing awards. In 2014, Ho won Los Cabos Open Of Surf WQS 6 Star- Champion.
On being nude in the ESPN The Body Issue, Coco Ho told the ASP World Tour website:


Hmm, thing is I don’t see the “in-your-face” sexuality about the ESPN Body Issue — if anything, I see the integrity in ESPN as a whole and think of it as something so prestigious, a once-in-a-lifetime opportunity. So when I saw Kelly, Maya, and Steph’s, the only thought that registered was: “This is sick, this is the only nude shoot I’d ever do!”

The hot surfer turned down chances to do sexy photo shoots, including Stab magazine, but agreed to go nude the ESPN Body Issue.


I was approached through email via my manager, and I was ever so excited because I’ve been waiting for this day. I’ve been offered to do the “sexy” Stab mag shoots more than a handful of times — the one that almost half of the girls have already done — but I told my manager the only nude shoot I’d ever do was the Body Issue. If I was ever to strip down for a photo shoot I wanted it to be with integrity and alongside some of the world’s most respected athletes.

Of course, it is not surprising that Coco Ho looks awesome nude on a surfboard as the surfing hottie spends much of her time in skimpy clothing like bikinis.

Posted by Jockstrap at 12:57 PM No comments:


In one version of ESPN The Body Issue cover, snowboarder Jamie Anderson shows off her million dollar smile, sexy hair, and goggles while covering her breasts.


“I’ve never done any naked shoots or even bikini shoots so it was new for me to do that. At first I was a little bit terrified but it was really good practice for me to accept everything about myself and love my body and not judge the little things that we do as women or anyone and just embrace where I’m at. With hurting my foot a month before the [May] shoot, I didn’t really get to run or anything.
My first impression was that I want to work out and get super crazy fit. It didn’t really play out that way. I still live a healthy, active lifestyle but I wasn’t able to train as I would have. It became even more beneficial because I  got to step back and embrace myself and how I am and not try to fit this Hollywood image of being really super skinny.”

Posted by Jockstrap at 12:36 PM No comments:

While gorgeous Brazilian supermodel Gisele Bundchen (the world's highest paid supermodel) and sexy actress Bridget Monyahan are dressed down, watching them hug is undeniably sexy. These are two extremely attractive women. They are together because both have a child with NFL superstar Tom Brady of the New England Patriots.


"I understand that he has a mom, and I respect that, but to me it's not like because somebody else delivered him, that's not my child," she said. "I feel it is, 100 percent. I want him to have a great relationship with his mom, because that's important, but I love him the same way as if he were mine. I already feel like he's my son, from the first day."

However, the sexy pair have seemed to have developed a solid relationship. Bridget Monyahan told More magazine in 2011:

"I have a relationship with these people on a daily basis. I'm raising a child, and it's public. The media creates these dramas, and that's not what's happening in my life."

Posted by Jockstrap at 12:04 PM No comments:

In honor of Jessica Simpson's marriage, let's look at some hot pics of the blonde bombshell

Posted by Jockstrap at 11:34 AM No comments:

Sexy Canadian blonde bombshell tennis player Eugenie Bouchard has become the queen of the court by making it to the the finals of Wimbledon in 2014. Eugenie Bouchard, who has #GenieArmy all fired up with her strong play at Wimbledon and gorgeous good looks, is a twin and her sister Beatrice is arguably just as hot as she is.

What do you think? Are the royal sisters hotter or are Eugenie Bouchard and her twin sister Beatrice?

Posted by Jockstrap at 12:33 PM No comments: 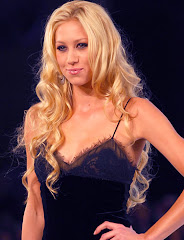